Instead of a Funeral, Community Plans Re-birth of Agency

Home/Blog/Instead of a Funeral, Community Plans Re-birth of Agency
Previous Next

Instead of a Funeral, Community Plans Re-birth of Agency 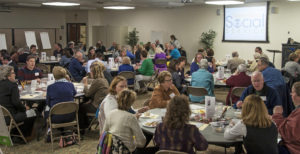 Nearly 100 people shared a light dinner together while the meeting continued.

One of the great joys of our work is seeing people come together to create something that no one thought was possible. My partner Bev Seiford and I had that experience recently when we worked with Saline Area Social Service (SASS), a small Michigan nonprofit.

We were engaged by the local United Way to work with the SASS board after the agency had nearly closed its doors a few months previously after losing some essential funding. The organization operates a food pantry and supplies other daily essentials, like coats for kids, serving 300-400 persons each month.  Many clients are seniors and about half are children whose families have fallen on hard times.

Despite facing a $75,000 budget shortfall,the agency’s board decided not to close but to seek community support. We provided consulting support to develop a strategic plan and a more sustainable funding model.  The idea of a community summit evolved at a time when the board wasn’t sure how much support to expect.

Invitations went out and we hoped to have 25 people attend.  In fact, nearly a hundred people showed up in the church hall on a Tuesday night in November.  It was a powerful, interactive Whole-Scale meeting that generated a groundswell of volunteers and ideas for raising money that frankly surprised the board and its new executive director.

The story of that meeting was chronicled in the local on-line paper, the Saline Post. Read the full story here.  You will note that Bev and I were listed only as “United Way consultants” which was just fine with us. 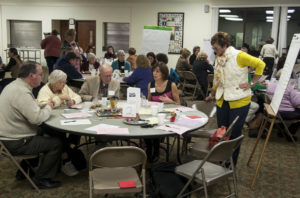 Peggy Rzepka (right) stands at the flip chart to take notes for her table group. 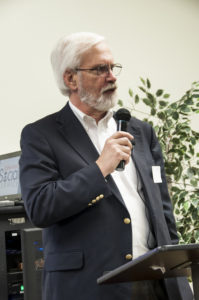 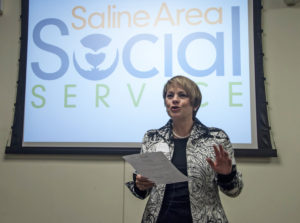 Bev Seiford, a consultant from United Way, laid out the goals for the meting.

About the Author: DTA Team